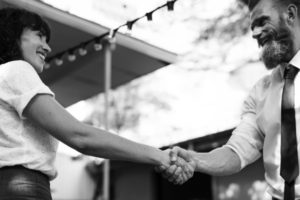 Why have your December unclosed deals vanished out of the January 2018 forecast? Did the customers get kidnapped by aliens? Did the Grinch who tried to steal Christmas steal your deals instead? Did a Bermuda Triangle mysteriously open up on New Year’s Eve and swallow the decision makers? Or did the sales people who were so confidently forecasting winning those deals in December get hypnotised by a pen, like the one used in ‘Men in Black’, and forget how close they were to a decision?

It’s a worldwide sales conundrum affecting every sales person and sales leader. In the cold reality of the new year, a good start to Q1 is crucial and clearly the deals that did not close in December, and into which so much effort, time and resource were invested, are the natural target to get some early wins. However, this simply does not happen on anything like the scale it should do – but why?

If we can answer this question, and apply some standard operating procedures to solving the problem to any degree then the rewards will be of material benefit – and not just to the sales people who close the deals in January. The entire sales team will be more motivated by early successes and leaders will have some breathing space to carry out planning for their new year strategies.

Why deals slip in December

There is a myriad of reasons why deals don’t close in December:

January is the time you’ll overhear conversations like this: “Well we tried to close that deal in December but we always knew it was unlikely” or “We upset the customer trying to close it too early so now we have to wait till ….” pick any month other than January, February or March!

So, what is causing those deals – which should be closed in January – to slip away into the distant future. In my view it’s all to do with the mindset of the sales team. Let’s face it, no-one likes to be reminded of their missed December forecast so instead they focus on getting busy with new prospects to divert attention from those lost sales. Somehow, it’s easier to bear the pressure of a poor Q1 because everyone knows that new deals have long sales cycles so generating lots of leads is the order of the day. Then there’s new prospect meetings, kick-off meetings and new year planning sessions all of which will fill up January.… leaving no time for those slipped deals.

How to close December slipped deals in January

If you keep the accounts or territory in 2018 that you had in 2017, there is every reason to try to close the slipped December deals, now.

From the customer’s perspective your deal sponsor will also have been working hard to get the sale approved and so for it not to happen on time is as frustrating for them as it is for you. However, it is rare for the customer to drop a deal completely. The customer had a business need and the need is usually still there!

Here are my three specific actions to raise the probability of a January close:

So, let’s banish the Grinch, steer around the Bermuda Triangle and get Q1 off to a flying start by closing those slipped December deals.

If you would like to pre-order a free copy of our new e-book “Winning the large value customer in 2018 – a sales leader’s guide” please email franc@rblassociates.com