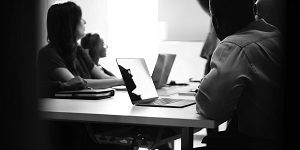 Imagine a world where sales teams only have one leader who engages the team as a single, unified group. Objectives are reviewed, direction is clear, issues are discussed and solutions found. The team contains specialists with different roles, but they all have one common objective, win more sales!

Then someone says, “This is way too easy, from now on we will have two or more leaders per team who will be based in different locations to each other and the team themselves.

Unsurprisingly, likely reactions to this type of idea would probably include:

“No way, we’d never get anything done.”

“How could we take quick decisions?”

“The competition will run rings around us…”

So with this in mind, why on earth has the business world – and the technology sector in particular – shackled itself to the deadweight tax of matrix management?

The challenges with matrix management

Imagine an orchestra where each violinist followed both the conductor and a separate leader based somewhere else. The conductor raises the baton to bring in the violins and…..there’s silence, save for the tapping of mobile phones as violinists seek permission to start playing from their matrix leader.

Or picture a football team where the goalkeeper follows the manager’s direction, but also had to phone a regional goalkeeper leader for guidance during the game and…oh whoops, the opposition have scored.

In all of those companies, I found the same thing. Matrix management is, without doubt, the biggest waste of time for leaders, the root cause of conflicting communications and the trigger for endless tension and disputes. There must have been good intentions behind the initial creation of matrix management, however since then it’s become the vampire squid sucking all life out of business. Its ambiguity and grey scope means, unless you have exceptional leaders who even then have to devote precious time to ‘nurture it’, it’s open for petty empire building and is ultimately an unlimited source of trouble.

This example – which would be laughable if it weren’t such a graphic representation of the bureaucracy siloes and general issues of matrix management – highlights the challenges. Whilst running the EMEA territory for a tech vendor of around 80 salespeople, a pre-salesperson in the team had a minor issue with their teammate. This got escalated to the matrix manager of pre-sales EMEA who then reported it to the wider head of pre-sales, who then spoke to the head of HR who then blasted the head of sales who then finally descended on me like a ton of bricks wanting to know what was going in. To which I replied, “I have no idea what you’re talking about.”

More recently, I was talking to a regional leader within EMEA who is spending a large amount of time building a ‘virtual team’ because the inside sales and pre sales people that are aligned to his sales reps don’t report to him.

I fully recognise that specialists need recognition and support from their designated leader, but it’s time to do this better than we currently are.

However, it’s important to note that this is not about anyone in a team being less important than others. I’ve personally worked alongside hugely talented pre-sales consultants without whom deals would have fallen by the wayside. In fact, I’m a believer that the optimum team at the lowest level is comprised of a sales rep, a technical specialist and an inside salesperson.

We need to give back control to a single leader who needs to be able to step up to direct, motivate and manage all the specialists within their team. In parallel, inter-team working groups can share best practices for each specialist discipline. A phased start would involve handing overall control of all resource over to each regional leader heading the APAC, Americas and EMEA regions, for example, and breaking links to global matrix leaders. In larger firms, this may need to be executed at a country level.

The rewards in increased productivity, quality of execution, speed of decision making, reduction in conflict (and pointless email threads), boost in morale and adoption of a can-do, united team will make this a worthwhile change. And, for leaders, your time can be better spent conquering your competition.

How do you deal with the challenges created by matrix management?